This powerful event is designed to shine a spotlight on women who are transforming the way we view leadership.  The landscape is changing, and women are at the forefront.  Listen to the inspiring keynote delivered by Trisha Prabhu, our local Rhodes Scholar and innovator, followed by an interactive panel discussion with extraordinary leaders, Kelly Douglas, Grace Buzzard and Karen Wells. 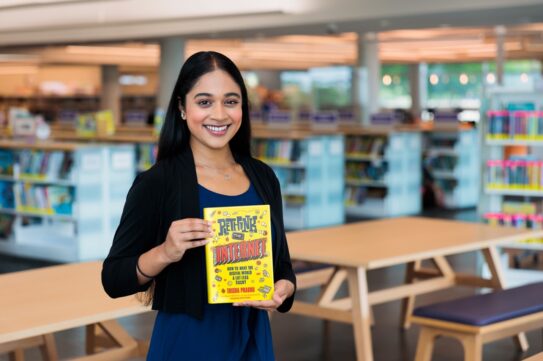 Trisha Prabhu is the inventor of ReThink™, a patented, world-acclaimed app that stops cyberbullying before the damage is done. Trisha invented ReThink when she was 13 years old. Working across all apps, from email to social media, ReThink detects offensive messages, and gives users a chance to “ReThink” sending them. Trisha’s research —acclaimed by Google and MIT — finds that over 93% of the time, ReThink works. For her work with ReThink, Trisha was named a Google Science Fair Global Finalist, and selected to present ReThink at The White House. With the support of partners like Scholastic and the U.S.State Department, ReThink technology, related educational resources, and message has been introduced to youth in over 134 nations. The ReThink app is also now available in 8 international languages, including Spanish.

Trisha is also the humble recipient of many awards; among them, the WebMD Health Hero Prodigy Award and the Princess Diana International Anti-Bullying Award. And in the business world, Trisha has made waves — as a contestant on ABC’s Shark Tank, and as the winner of Harvard University’s President’s Innovation Challenge and MIT Solve’s Elevate Prize. In 2021, she was the youngest honoree named to Forbes’ 30 Under 30 Social Impact list.

Trisha has delivered 75+ talks in 30 cities in 3 languages about the power of “ReThinking,” including on several TED and TEDx stages. Her debut book, “ReThink the Internet,” the world’s first-ever “by-youth, for-youth” guide to responsibly navigating the Internet, was released in May 2022 from Penguin Random House. Trisha is a graduate of Harvard University, where she was recently named a recipient of the prestigious U.S. Rhodes Scholarship. In the fall, she will begin her postgraduate study at the University of Oxford. You may learn more about Trisha and ReThink at www.trishaprabhu.com and www.rethinkwords.com.

Tickets can be purchased through April 14
$50 for general public, $25 for staff/faculty

Sponsor our LeadHERship Summit at all levels:

View the Benefits of each level of Sponsorship HERE
L.E.A.D.S. = Leadership. Empowerment. Action. Development. Service.
Empowering Women to lead with their BEST © L.E.A.D.S. is based on the principles of Benevolent Leadership, an emerging model of leadership informed by insight related to ethics/morality, spirituality, vitality/positivity, and community, all qualities of leadership contributing to the common good. CLICK HERE for more information.